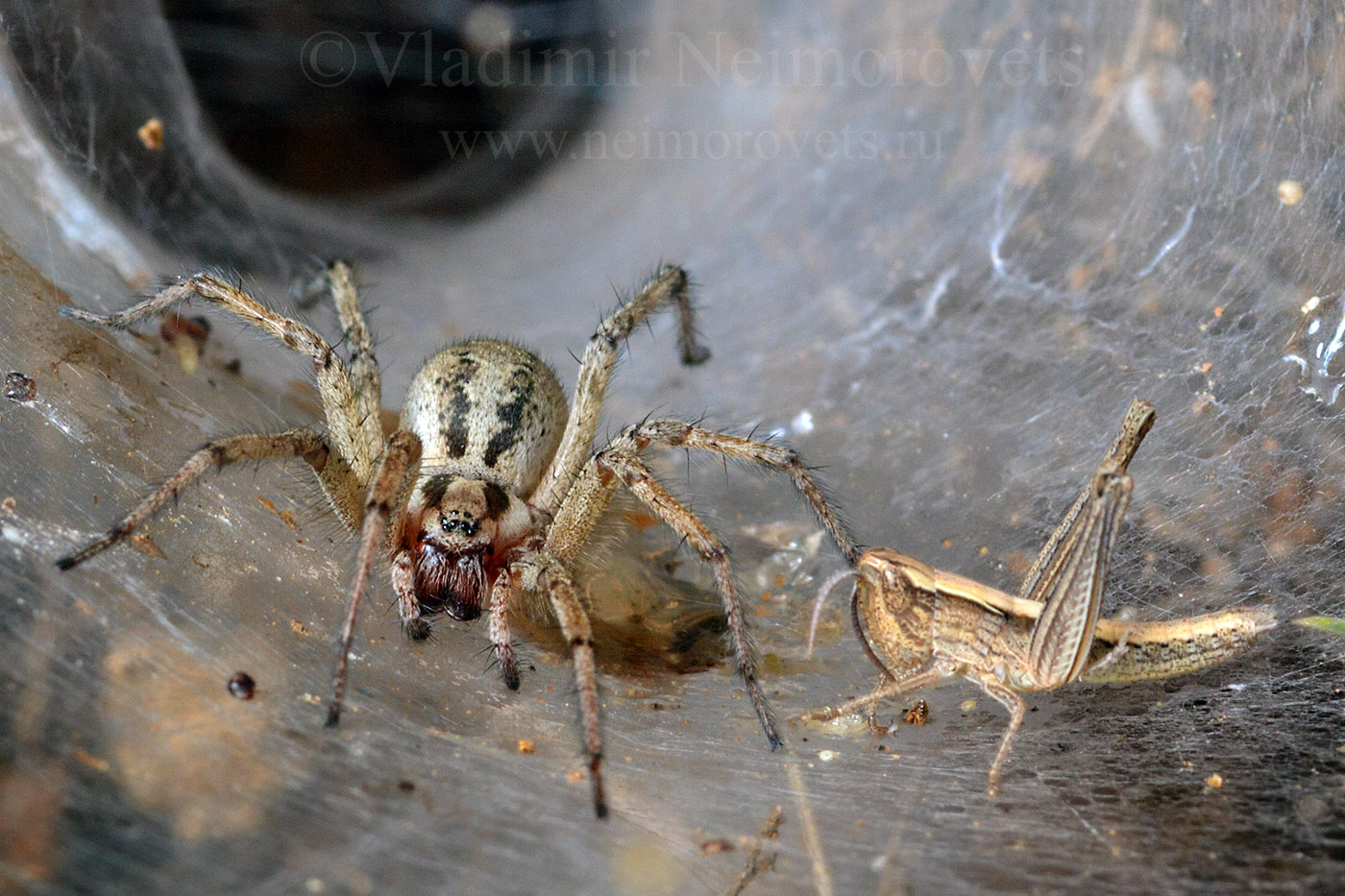 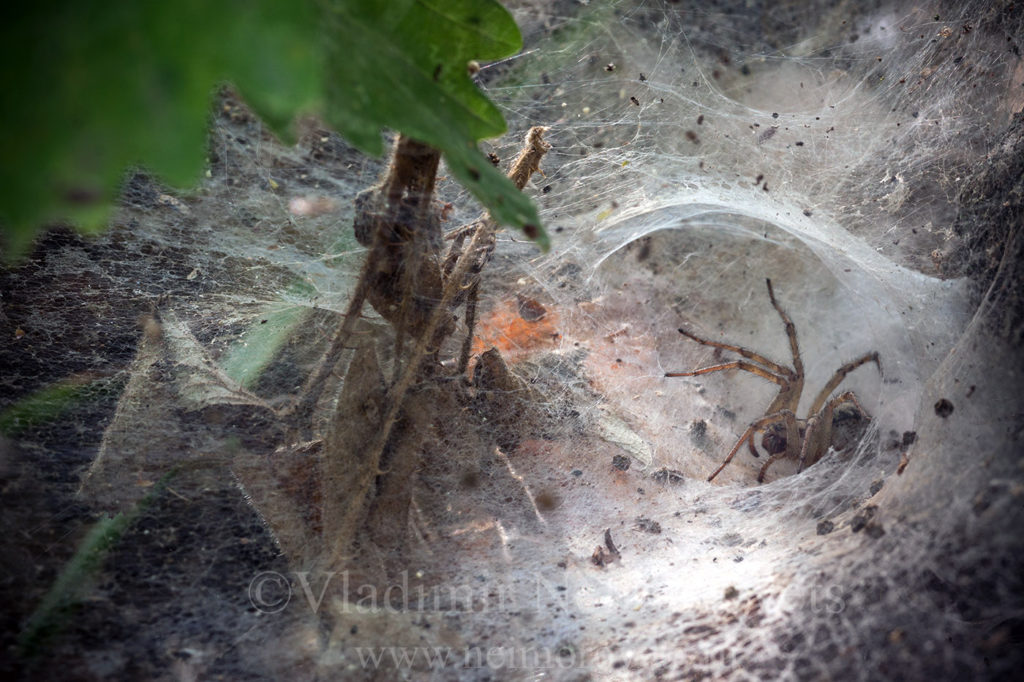 The funnel-web spider Agelena orientalis is often found along the edges of the foothill forests of the Northwestern Caucasus. Their abundance is especially noticeable in the summer, starting in July. In some places, the web of this species is found at literally every step.

Funnel webs are weaving both females and males. The web can be located both on the ground and in trees, sometimes very high. There are trees where Agelena’s webs are located on several floors. The web of Angelena is almost horizontal. First, the spider weaves a denser funnel, and then the rest of the thinner part of the web. The funnels often are going to somewhere in a crack of the bark or in a hole in the ground. This provides it with reliable protection. This is the spider’s lair. Here it hides at the slightest danger. 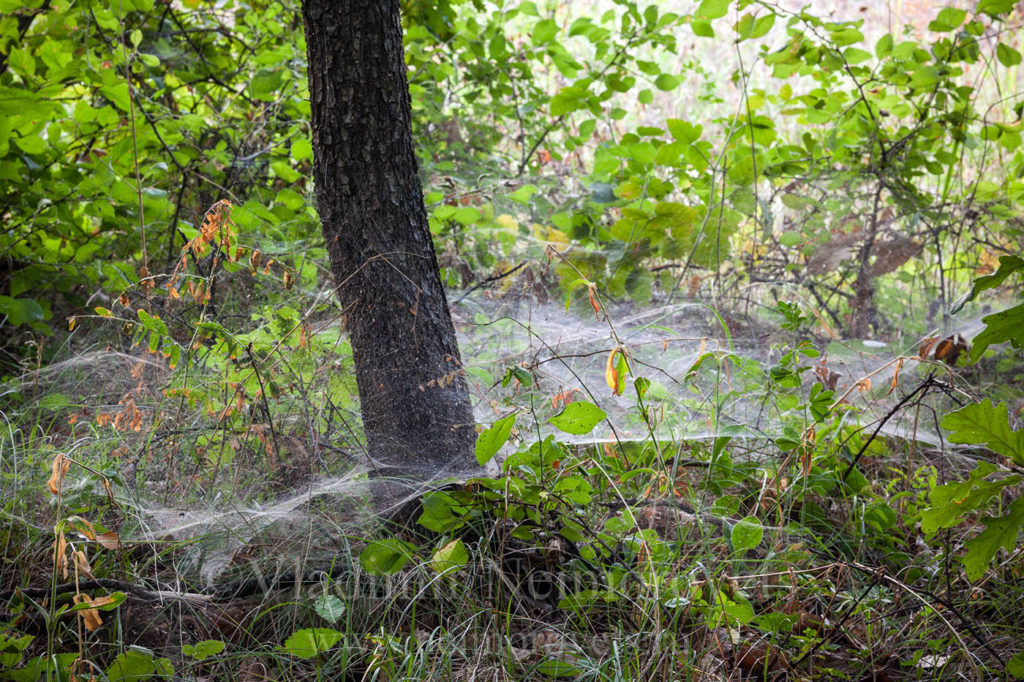 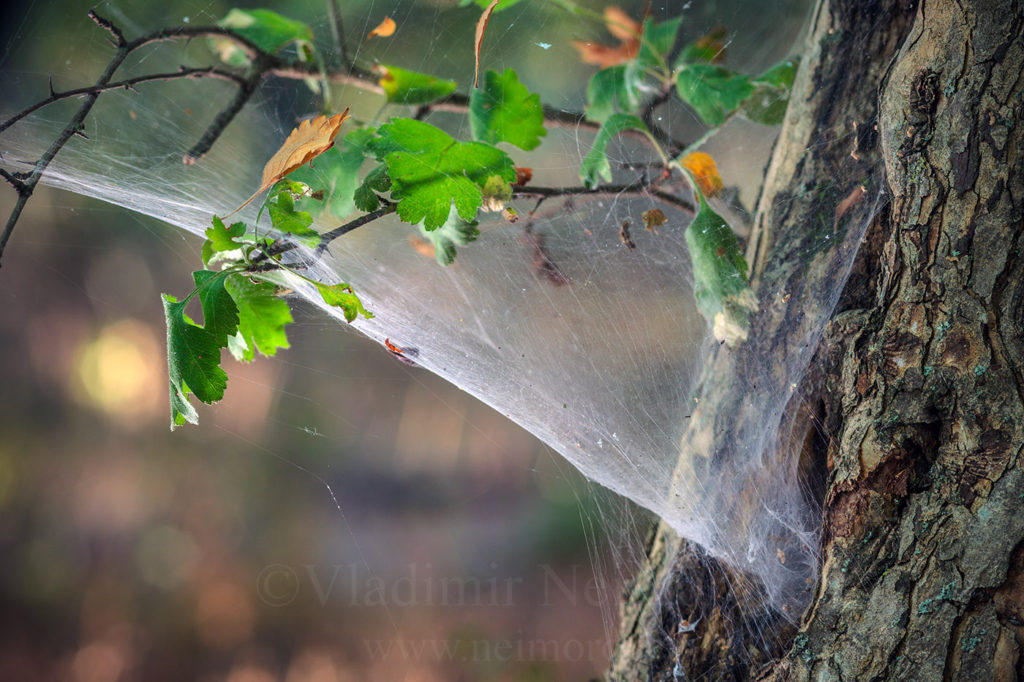 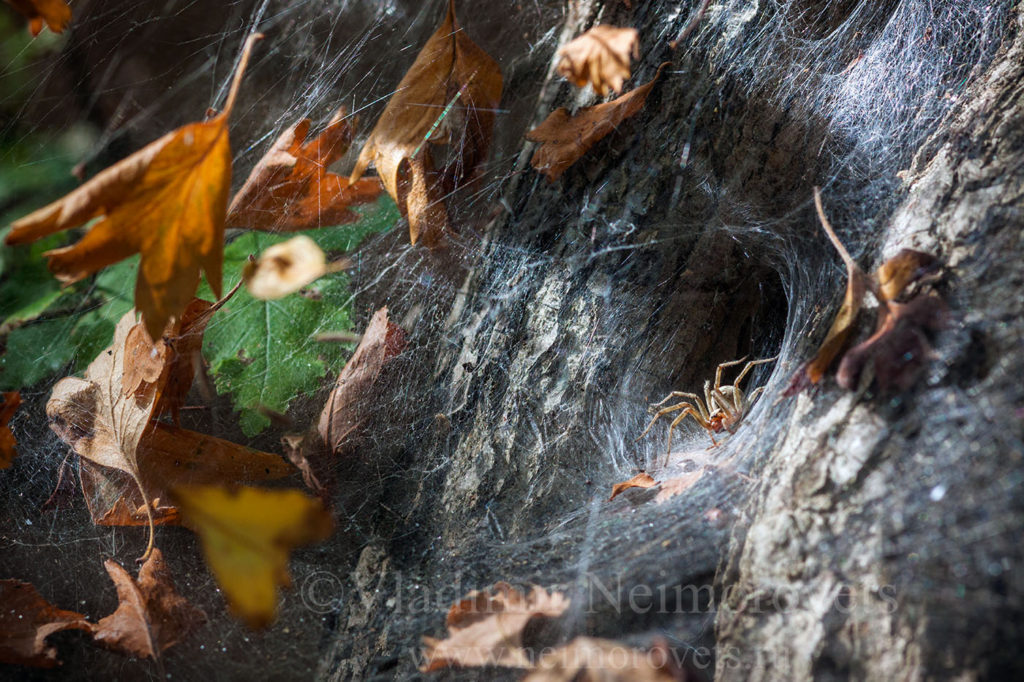 The spider sits at the entrance to its lair and waits until someone edible falls on the web. Its body is thickly covered with sensitive hairs. The spider literally feels by its skin where the vibration comes from. The spider’s pedipalps also touch the net. Agelena very well distinguishes the vibrations that done by fallen trash from the vibrations created by a living object. 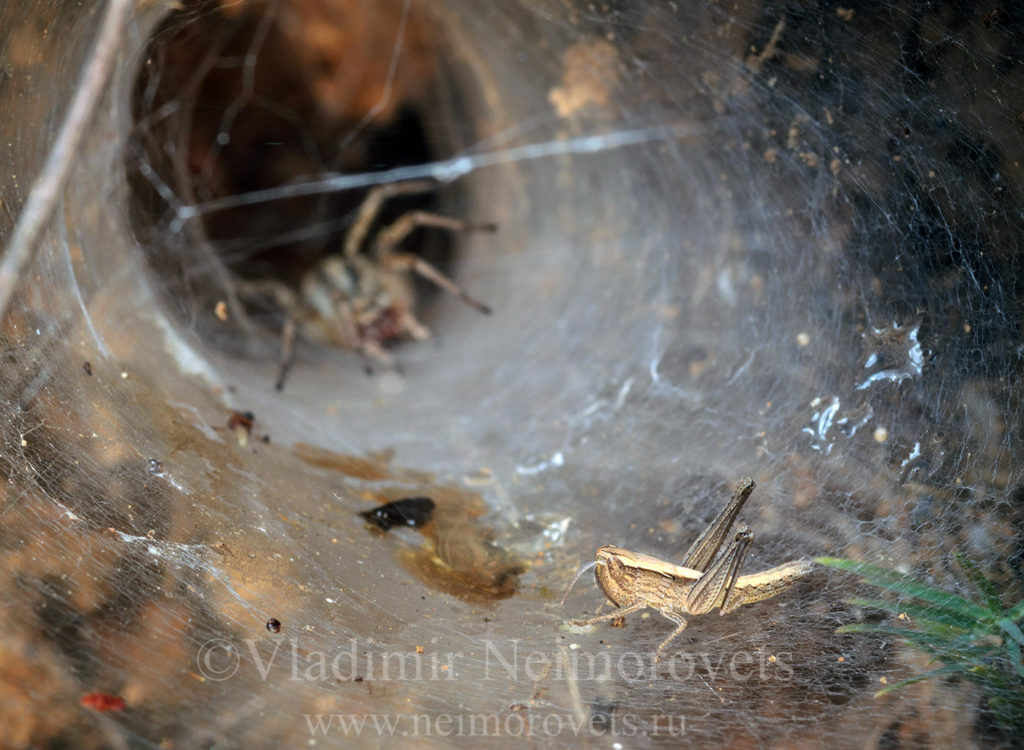 If something living falls into the web, the spider instantly runs to the insect that has fallen into the web. If the prey is large, for example, a grasshopper, Agelena does not often attack immediately. Several times I watched the spider freezes near the captive for 1-2 seconds as if studying it. If in the opinion of the spider, everything is OK, it makes a rapid throw and bites the victim in a joint. Then he immediately bounces off for some distance and freezes for a couple of seconds in a characteristic posture – it presses the femorae of the front legs to its body and as if preparing for a new hit. Sometimes he gives the victim several bites, and after each one he freezes in the same specific pose. Then the spider returns to the entrance to the lair and sometimes hides in it. The spider returns to prey in 5-7 minutes and first feels the victim with its front legs as if it is making sure that the insect will no longer antagonize. Then the spider drags the prey inside the funnel, where it sucks it out. Later it throws away the remains of the victim from his shelter. 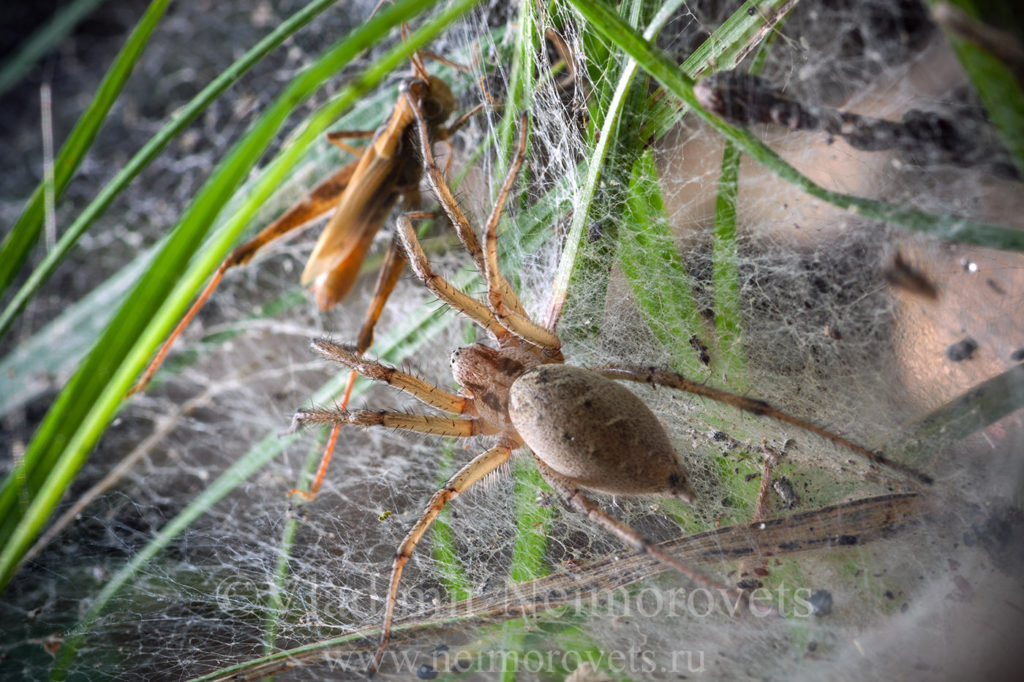 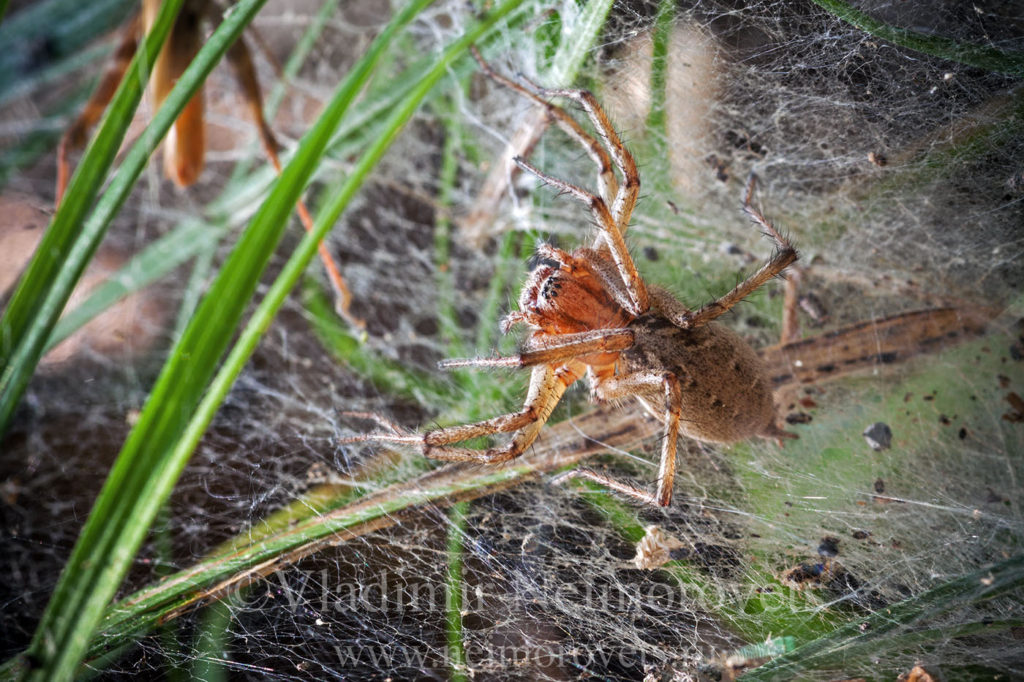 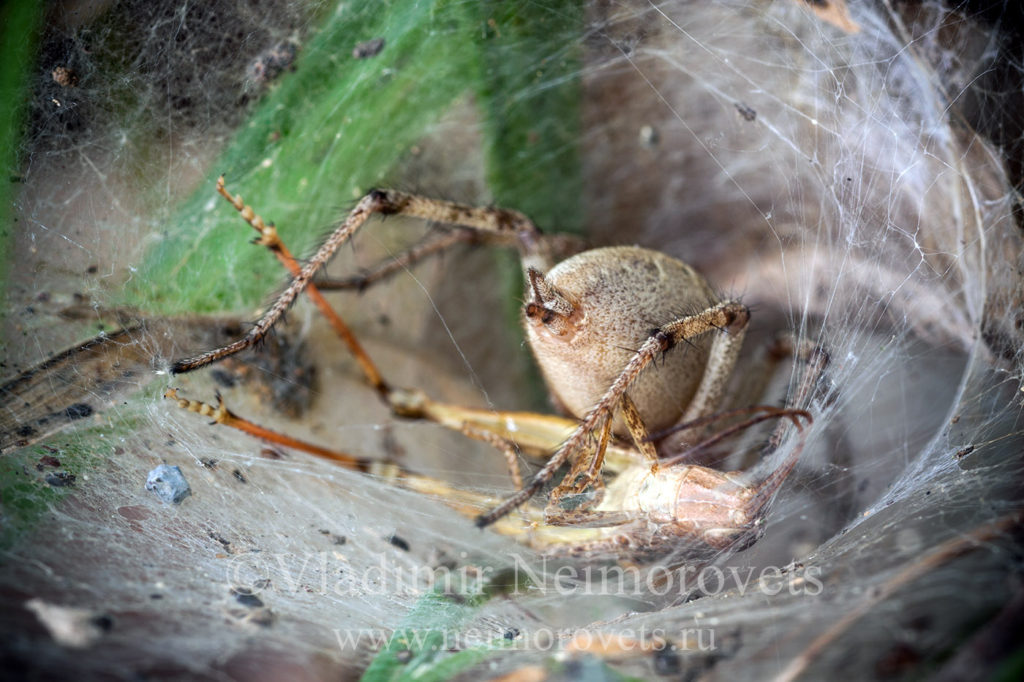 If the prey is small, for example, a fruit fly or a mosquito, Agelena seizes it immediately without delay and sucks it out without dragging to the shelter. The spider can crumple a small insect with its chelicerae so much that it turns into a shapeless lump. 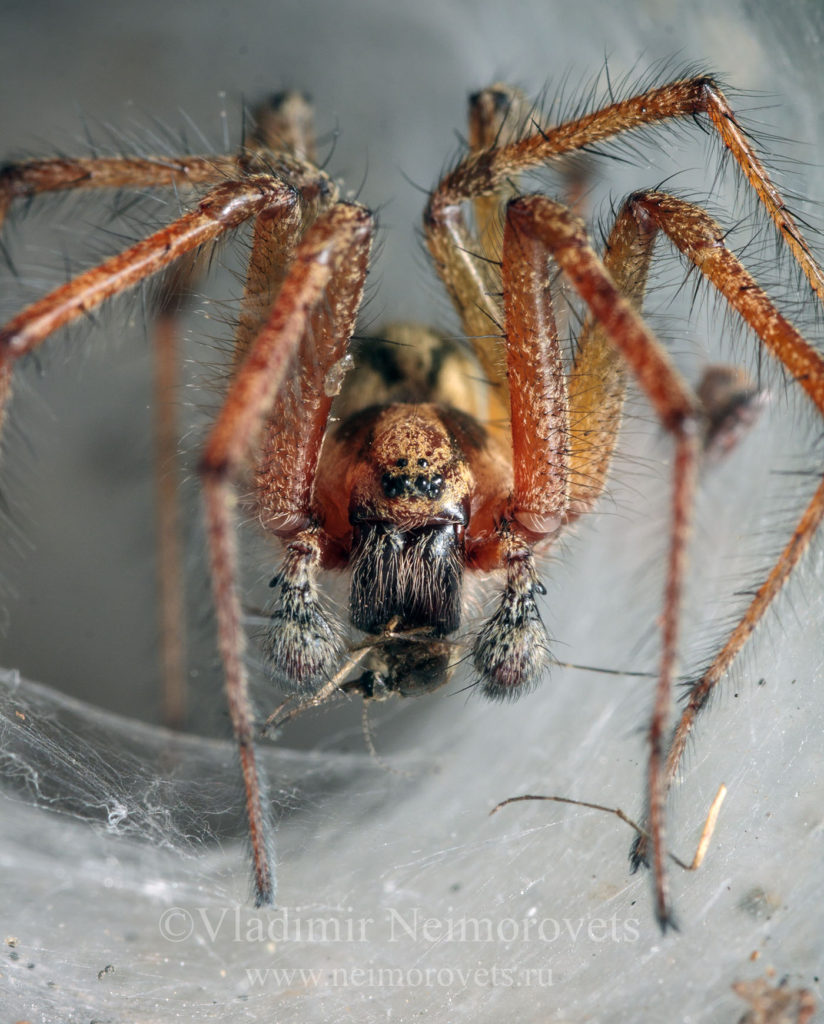