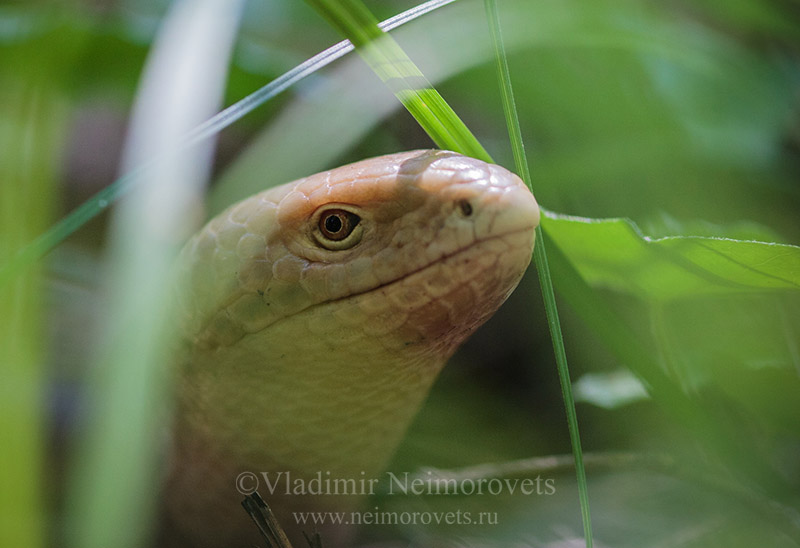 This is the largest legless lizard. The body length often exceeds 1 m. The European legless lizard (also commonly called  Pallas’ glass lizard) looks like a snake by its appearance. However, he is not as flexible as a snake. In the anterior part of the body, each side with a well-marked longitudinal furrow formed by folds of the skin. The males also have papilliform rudiments of the hind legs near the anus.

The activity of the European legless lizard is observed from the end of March to the end of October. They meat mostly invertebrates, but they can hunt lizards, snakes, rodents and even birds!

From mid-June to early July, females lay 6-8 eggs. Young lizards are born in August-September. Their size ranges are from 95 to 150 mm.

This amazing reptile is spread in the Eastern Mediterranean, Crimea, Caucasus,  Western and Central Asia. The European legless lizard dwells in dry places, avoids moisture and adheres to the woody and shrubby vegetation of the Mediterranean type. It often meets in the agricultural lands of foothills. In the Western Caucasus, the species lives in the immediate vicinity of the Black Sea, not rising on altitude above 400 m above sea level.

Exactly here, on the Black Sea coast that I regularly meet with the European legless lizard. I’m always amazed at his eyes, his gaze. Sometimes it even seems that this is quite a reasonable being. He is absolutely not aggressive. Usually our meetings are like these — I’m going through sparse forest or along the trail and I’m seeing some kind of stick. There is unclear from which tree it fell down. Then suddenly I notice an eye watching me carefully. If I will move very slowly and very smoothly, I can come close to it. But the slightest careless movement — and the European legless lizard breaks off. And down the slope it is very difficult to catch it up. On a dry litter, it slides as if on ice, hardly wriggling. I must say that its skin is very smooth to the touch.

Pseudopus apodus thracius is relict endemic subspecies of the European legless lizard with a rapidly declining population. He needs protection. Included in the Red Book of the Krasnodar Territory.